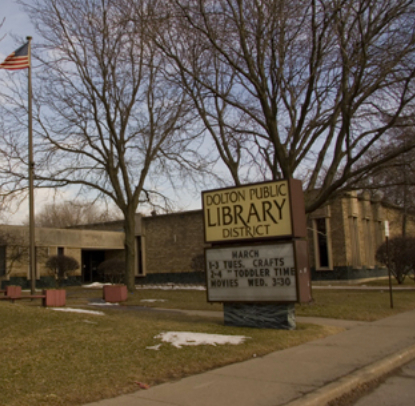 The early history of the Dolton Public Library dates back to before 1946 when the Dolton-Riverdale Junior Woman’s Club, the Franklin PTA, and the PTA of District 148 each established a committee to promote the need for a local public library. On April 28, 1953 a tax referendum for the Villages of Dolton and Riverdale to fund the establishment of a public library failed, in part, because of a small voter turnout.

The Dolton-Riverdale Woman’s Club, under the direction of Mrs. Emma Dillner, began lobbying for a tax-free public library after the tax referendum failed. They named the proposed new library The Village Library. Letters were sent to various organizations asking for monetary and book donations to establish the library. The Dolton Village Board cooperated by allowing the fledgling library to use space on the second floor of the Village Hall.

On April 25, 1954, a meeting was held to plan for the library. Fifty-two organizations were involved in the initial planning. Miss Leona Ringerling of the State of Illinois Library was the guest speaker. Following her visit, the State loaned 500 books. An additional 700 books were collected by a door-to-door canvas in May.

The library applied for a not-for-profit status, and it was incorporated as The Village Library Corporation on July 15, 1954. Membership in The Village Corporation was $1.00 per year for individuals. The Library used no tax money; and it was available to the residents of Dolton, Riverdale, and Ivanhoe.

The Village Library opened on September 26, 1954. Five thousand books and magazines were available for checkout. These resources were cataloged and organized from June through September by Mrs. Horvat and a group of volunteers. “Crooked book pockets or date due slips may not be up to library standards, but we’re proud to tell you that many of them were pasted by helpers not old enough to read, while their mothers and grandmothers typed your card catalog and their big sisters were assembling!” Initially the library was opened from 7:00 p.m. to 9:00 p.m. Monday, Wednesday, Friday, and from 3:00 p.m. to 5:00 p.m. Tuesday and Thursday. Saturday hours were from 10:00 a.m. to 4:00 p.m. Books circulated at a rate of 2 per minute for the 16 hours per week that the library was open to the public. The opening budget was $1,200.00 per year.

By January of 1955, the growing library required a second room in the Village Hall. It was the intent of Mrs. Edith Dolton to establish a permanent home for The Village Library in her home after her death. Although her house was willed to the library, it could not be used for that purpose because of termite and structural problems.

The library’s popularity and collection continued to grow. On September 22, 1975, a consultant was hired to design plans for an addition. A $990,000 bond referendum and tax increase proposal passed on June 25, 1976 to pay for the 16,000 square foot addition. The Village of Dolton donated the land. This new building was dedicated on September 9, 1979. A final modernization and remodeling including the now famous train station, was completed in 1991.

As expressed by the Board of Trustees on opening day, “A great deal of debt is owed to so many friends in the Dolton-Riverdale area for the success of our library that it would be difficult to list the names of all who have made this library possible but to all residents, past and present, we say a warm thank you for a job well done!”

Over the years the Dolton Public Library has served generations of users since its initial opening at the present location at 14037 Lincoln Avenue; Dolton, IL 60419. Recently, this dignified, stately building, received an interior renovation resulting in an upgrade that renewed all of its interior spaces and integrated many old and new services and features which represents the cultural diversity of the community. Some of the featured renovation included a 21st century upgrade to the youth and adult sections, updated workspaces and study rooms, a new media room, and various eye-catching upgrades from floor to ceiling. Upgrades to the main entrances of the library and washrooms were also completed and were made to be ADA compliant to serve the handi-capable clientele.

On Saturday, March 30, 2019, the Dolton Public Library District’s Board of Trustees, which includes Trustee Sherry Jackson, President; Trustee Vivienne Wallace-Culp, Vice-President; Trustee Patricia Robinson, Treasurer; Trustee Dawn Williams, Secretary and Trustee Louise Copeland, Trustee Elizabeth Gonzalez and Trustee Evelyn Sorrell conducted the ribbon cutting ceremony in which to continue with the passing of the torch to this “newest chapter” of the Dolton Public Library. This Grand Re-Opening Celebration was extended to the entire Dolton community to celebrate with a tour of the newly renovated facility. 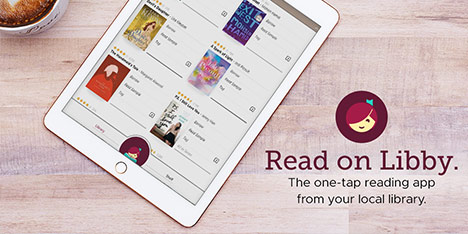